Doll Splinter and Spindly Cat sat together in a companionable way. They were waiting for the rabbits to say something but so far all was quiet.

“I shall tell you a story”, said  Spindly Cat, who usually said very little.

This is the story she told. It is called ‘Milly’s Story.’ 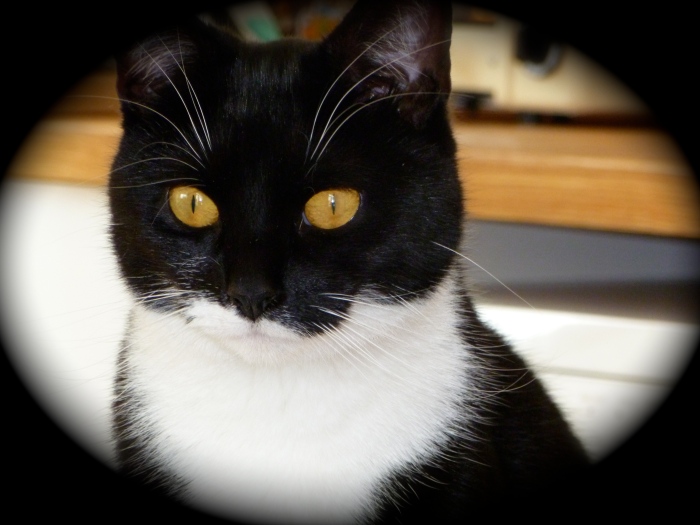 Once there was a little lost black and white cat who was so very lost that she had no name.

When the black and white cat was a kitten sleeping all cosy and soft and furry with her mother and brothers and sisters in a basket, perhaps someone opened the back door, and maybe a quicksilver mouse ran by or a leaf flickered ; whatever it was, something caught her eye, and suddenly she was outside where everything was new. Did the mother cat notice she was missing and call for her? If she did it must have been too late. The kitten was already lost. She  probably wandered about from one place to another,hiding in the long grass for days or creeping behind bins and being chased by angry tomcats and dogs and curious children. Maybe someone fed her little bits of this and that or maybe she went scavenging in and out of houses because she managed to grow  somehow, and people started to notice her and they called her a stray, and some said she was a nuisance and some felt sorry for her. They spotted her peering through their windows and doors or found her poking her paws about in their rubbish or noticed her sitting under their cars in the pouring rain. She was thin and bedraggled and her eyes were round and large but there was something she did that could make people smile: she would roll over and show her soft white tummy and they could see she had black spots on her hind feet like little fancy socks.

One day someone made a telephone call and concerned people came with traps and a basket and they caught the little cat. She was taken in a van to a place for stray animals and put in a cage next to other stray cats and kittens. There was a smell of disinfectant,strangers came and went and in other rooms dogs barked. The cat sat in her cage and looked through the bars and when anyone came with food she rolled over.

The little cat was one year old and she was about to get a name.