“So did they live happily ever after in that house?” asked Doll Splinter.

“This is what happened next” he said.

The woman and the cat settled down and became accustomed to one another. They sat together in the evenings and during the day the cat came and went. Once, she came home with a toad that jumped about on the landing and the woman carefully scooped it up and took it outside,and once she brought a mouse that was not so lucky. But mostly they lived a quiet sort of life until the time came when the woman decided to move house.She began to pack things into boxes and take books from shelves but the cat didn’t mind.Nothing had changed for her,her bowl hadn’t moved and she still went in and out through her own little door in the kitchen.

On the day of the move the cat was shut in the bathroom. There was a lot of too-ing and fro-ing,the sound of heavy boots on the stairs and voices she did not recognise.Then someone came in and put her into a basket and then she was in a car and she hated that.She began to complain,loudly.

Gradually the woman put the house in order.Books were put on shelves, rugs laid on floors,saucepans put away. But when the little cat was first allowed into the sitting room she ran into the corner,sniffed suspiciously,and urinated.

The woman cleaned it up and then she too noticed a smell.It was very strong and it wouldn’t go away and the woman wondered if it was the black and white cat’s fault.Of course she did!

Not long after that a man came to do some work on the house and he went into the cellar.It was a low ceilinged cellar and he had to stoop when he was under the sitting room.When he came out he was carrying a piece of cardboard.

It was a skeleton with little ragged scraps of reddish fur still clinging to it.

And feeling sorry for the fox the woman stroked the black and white cat.

Of course she did! 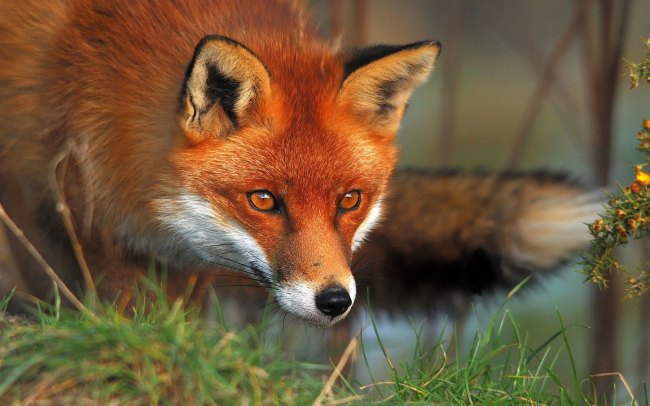